The Protecting Veil of the Most Holy Mother of God

Posted on October 12, 2017 by lebanonorthodoxwebmaster

The Protecting Veil of the Most Holy Mother of God 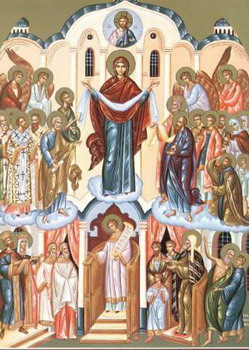 The Protection of the Most Holy Theotokos: “Today the Virgin stands in the midst of the Church, and with choirs of Saints she invisibly prays to God for us. Angels and Bishops venerate Her, Apostles and prophets rejoice together, Since for our sake she prays to the Eternal God!”

This miraculous appearance of the Mother of God occurred in the mid-tenth century in Constantinople, in the Blachernae church where her robe, veil, and part of her belt were preserved after being transferred from Palestine in the fifth century.

On Sunday, October 1, during the All Night Vigil, when the church was overflowing with those at prayer, the Fool-for-Christ St Andrew (October 2), at the fourth hour, lifted up his eyes towards the heavens and beheld our most Holy Lady Theotokos coming through the air, resplendent with heavenly light and surrounded by an assembly of the Saints. St John the Baptist and the holy Apostle John the Theologian accompanied the Queen of Heaven. On bended knees the Most Holy Virgin tearfully prayed for Christians for a long time. Then, coming near the Bishop’s Throne, she continued her prayer.

After completing her prayer she took her veil and spread it over the people praying in church, protecting them from enemies both visible and invisible. The Most Holy Lady Theotokos was resplendent with heavenly glory, and the protecting veil in her hands gleamed “more than the rays of the sun.” St Andrew gazed trembling at the miraculous vision and he asked his disciple, the blessed Epiphanius standing beside him, “Do you see, brother, the Holy Theotokos, praying for all the world?” Epiphanius answered, “I do see, holy Father, and I am in awe.”

The Ever-Blessed Mother of God implored the Lord Jesus Christ to accept the prayers of all the people calling on His Most Holy Name, and to respond speedily to her intercession, “O Heavenly King, accept all those who pray to You and call on my name for help. Do not let them not go away from my icon unheard.”

Sts Andrew and Epiphanius were worthy to see the Mother of God at prayer, and “for a long time observed the Protecting Veil spread over the people and shining with flashes of glory. As long as the Most Holy Theotokos was there, the Protecting Veil was also visible, but with her departure it also became invisible. After taking it with her, she left behind the grace of her visitation.”

At the Blachernae church, the memory of the miraculous appearance of the Mother of God was remembered. In the fourteenth century, the Russian pilgrim and clerk Alexander, saw in the church an icon of the Most Holy Theotokos praying for the world, depicting St Andrew in contemplation of her.

The Primary Chronicle of St Nestor reflects that the protective intercession of the Mother of God was needed because an attack of a large pagan Russian fleet under the leadership of Askole and Dir. The feast celebrates the divine destruction of the fleet which threatened Constantinople itself, sometime in the years 864-867 or according to the Russian historian Vasiliev, on June 18, 860. Ironically, this Feast is considered important by the Slavic Churches but not by the Greeks.

The Primary Chronicle of St Nestor also notes the miraculous deliverance followed an all-night Vigil and the dipping of the garment of the Mother of God into the waters of the sea at the Blachernae church, but does not mention Sts Andrew and Epiphanius and their vision of the Mother of God at prayer. These latter elements, and the beginnings of the celebrating of the Feast of the Protection, seem to postdate St Nestor and the Chronicle. A further historical complication might be noted under (October 2) dating St Andrew’s death to the year 936.

The year of death might not be quite reliable, or the assertion that he survived to a ripe old age after the vision of his youth, or that his vision involved some later pagan Russian raid which met with the same fate. The suggestion that St Andrew was a Slav (or a Scythian according to other sources, such as S. V. Bulgakov) is interesting, but not necessarily accurate. The extent of Slavic expansion and repopulation into Greece is the topic of scholarly disputes.

In the PROLOGUE, a Russian book of the twelfth century, a description of the establishment of the special Feast marking this event states, “For when we heard, we realized how wondrous and merciful was the vision… and it transpired that Your holy Protection should not remain without festal celebration, O Ever-Blessed One!”

Therefore, in the festal celebration of the Protection of the Mother of God, the Russian Church sings, “With the choirs of the Angels, O Sovereign Lady, with the venerable and glorious prophets, with the First-Ranked Apostles and with the Hieromartyrs and Hierarchs, pray for us sinners, glorifying the Feast of your Protection in the Russian Land.” Moreover, it would seem that St Andrew, contemplating the miraculous vision was a Slav, was taken captive, and became the slave of the local inhabitant of Constantinople named Theognostus.

On the Feast of the Protection of the Most Holy Theotokos we implore the defense and assistance of the Queen of Heaven, “Remember us in your prayers, O Lady Virgin Mother of God, that we not perish by the increase of our sins. Protect us from every evil and from grievous woes, for in you do we hope, and venerating the Feast of your Protection, we magnify you.”

Today the faithful celebrate the feast with joy
illumined by your coming, O Mother of God.
Beholding your pure image we fervently cry to you:
“Encompass us beneath the precious veil of your protection;
deliver us from every form of evil by entreating Christ,
your Son and our God that He may save our souls.”

Today the Virgin stands in the midst of the Church
and with choirs of saints she invisibly prays to God for us.
Angels and bishops worship,
apostles and prophets rejoice together,
since for our sake she prays to the pre-eternal God.

This entry was posted in Events, Parish Activities. Bookmark the permalink.