Posted on October 15, 2019 by lebanonorthodoxwebmaster

On October 19th, 2019 (Saturday) we will celebrate the Divine Liturgy from 9:30 am, when we venerate St. Apostle Thomas. Those who wish to bring Koljivo and Kolach are welcomed to bless them at the end of the Liturgy.

Here is the short biography of his life. 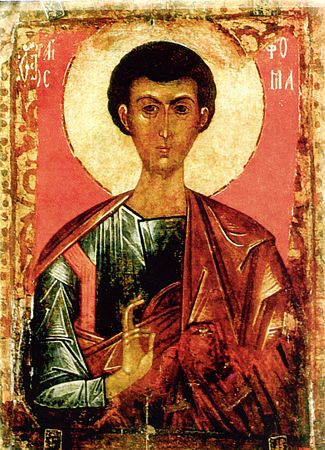 The Holy and Glorious Apostle Thomas was born in the Galileian city of Pansada and was a fisherman. Hearing the good tidings of Jesus Christ, he left all and followed after Him. The Apostle Thomas is included in the number of the holy Twelve Apostles of the Savior.

On the eighth day after the Resurrection, the Lord appeared to the Apostle Thomas and showed him His wounds. “My Lord and my God,” the Apostle cried out (John 20:28). “Thomas, being once weaker in faith than the other apostles,” says St John Chrysostom, “toiled through the grace of God more bravely, more zealously and tirelessly than them all, so that he went preaching over nearly all the earth, not fearing to proclaim the Word of God to savage nations.”

Some icons depicting this event are inscribed “The Doubting Thomas.” This is incorrect. In Greek, the inscription reads, “The Touching of Thomas.” In Slavonic, it says, “The Belief of Thomas.” When St Thomas touched the Life-giving side of the Lord, he no longer had any doubts.

According to Church Tradition, the holy Apostle Thomas founded Christian churches in Palestine, Mesopotamia, Parthia, Ethiopia and India. Preaching the Gospel earned him a martyr’s death. For having converted the wife and son of the prefect of the Indian city of Meliapur [Melipur], the holy apostle was locked up in prison, suffered torture, and finally, pierced with five spears, he departed to the Lord. Part of the relics of the holy Apostle Thomas are in India, in Hungary and on Mt. Athos. The name of the Apostle Thomas is associated with the Arabian (or Arapet) Icon of the Mother of God (September 6).

You were a disciple of Christ,
and a member of the divine college of Apostles.
Having been weak in faith you doubted the Resurrection of Christ,
but by feeling the wounds you believed in His all-pure Passion:
pray now to Him, O all-praised Thomas, to grant us peace and great mercy.

Thomas, the faithful servant and disciple of Christ,
filled with divine grace, cried out from the depth of his love:
“You are my Lord and my God!”

This entry was posted in Events, Orthodox Catechism. Bookmark the permalink.